Here it is, mid-October, and I still have peppers in the garden! Green tomatoes, too, and just a few snow peas. I’ve only had to cover the garden once so far, for a light frost. The other night, though, a hard frost was predicted. I figured I’d better just go ahead & harvest them, or I’d end up having to cover/uncover every day. Turned out I was wrong, & we might go another week before the next frost. Oops!

In any case, I had a HUGE pile of bell peppers, jalapeños, & green tomatoes. So yesterday morning I got to work. The first pile was for the freezer. I’ve read that if you freeze them raw, they do still retain some of their crunch. So, I’m trying it for myself, & will try to remember to update the post as the seasons progress. 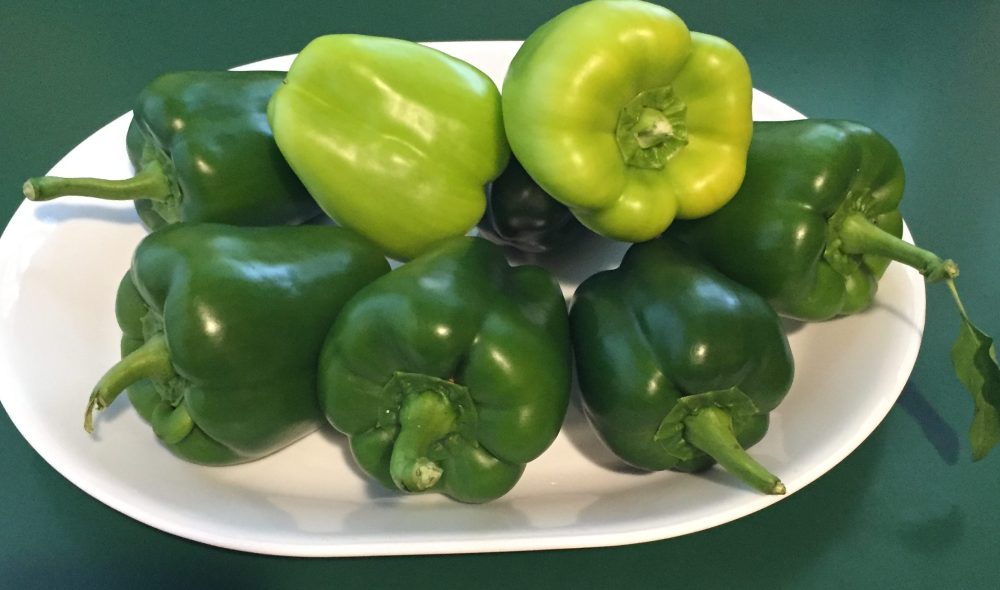 Some I chopped, & some cut into strips for fajitas. Then onto a rimmed baking sheet lined with a piece of parchment. (I used waxed paper for the chopped ones on the left. Parchment is better.)

One hour in the freezer, & then into ziptop freezer bags. I’ve read you can keep them in the freezer for 8-9 months, although I’m expecting that to be a little generous. On the other hand, I do use bell peppers a lot, so chances are pretty good I’ll have used them all long before next summer. 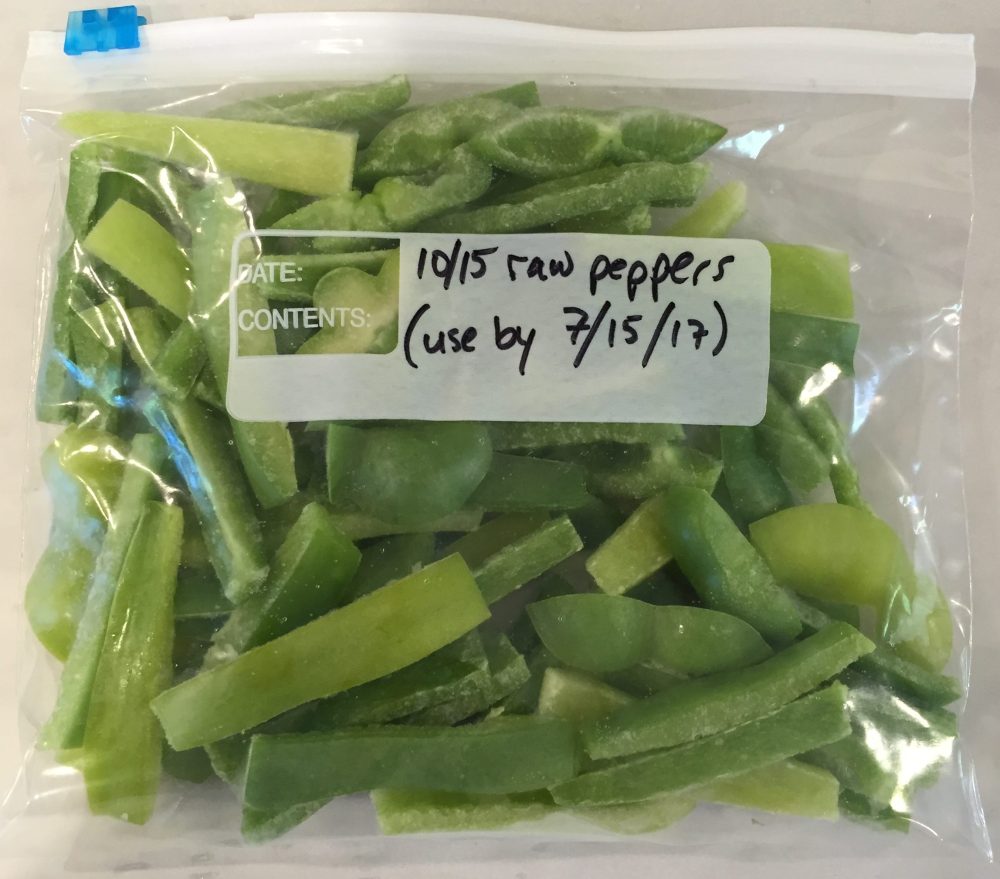 The jalapeños were even easier. They don’t hold their texture after being frozen but do hold their flavor & heat. And you can just freeze them whole! So I washed them, laid them out on the just-vacated parchment lined sheet pan, froze them, & popped them into their own freezer bag. 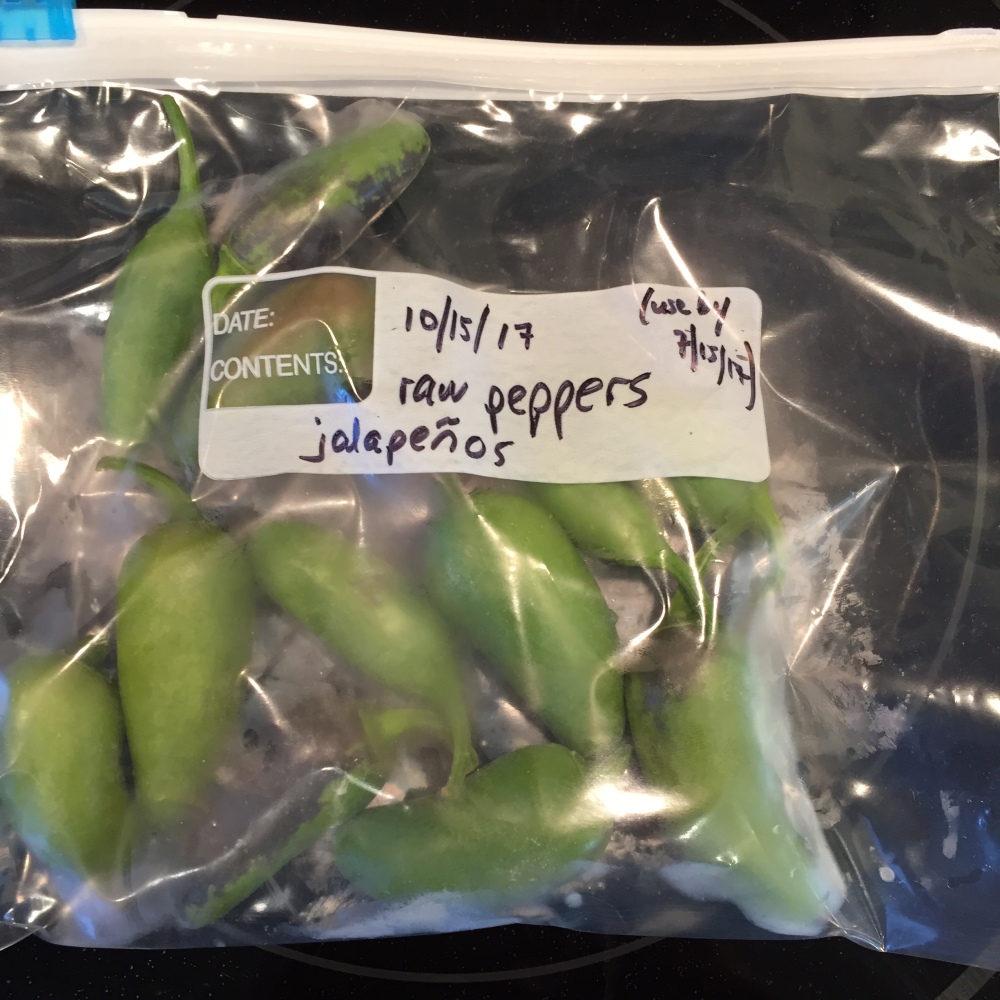 The next pile I set aside for Green Tomato Sauté for dinner, along with the mostly red pepper to slice for the salad. The pile after that was for a batch of delicious Great Green Sauce. Which does still leave me with a pile, but it’s a darn sight smaller. I figure I’ll probably give a few away. If there are still some left after that, I’ll have to come up with another idea. Or maybe just freeze the rest. Or another batch of  Sweet & Spicy Pickled Peppers. I’m open to ideas, so if you have a favorite recipe for using up green bell peppers or green tomatoes, I’d love to hear about it!

1/1/17 Update: I’ve successfully used some of the chopped ones in chili & other dishes, and the jalapeños in Fresh Winter Salsa and Citrus-Pickled Red Onions With Jalapeños. Of course, they’re not as good as the day they were picked, but they’re pretty darn close!
5/6/17 Update: I just used up the last of the peppers I froze in strips, for peppers & onions to go with grilled sausage. Not one of the 5 of us could tell they weren’t fresh. I will definitely be freezing any leftovers again this fall!

Questions? Comments? Funny Remarks? I'd love to hear from you! Cancel reply

This site uses Akismet to reduce spam. Learn how your comment data is processed.